Ventnor had an unexpected visitor in the summer of 1938; these  extracts are from the Isle of Wight Mercury on the 27 May and 4 June that year, and give an evocative picture of that time.

“The Emperor Haile Selassie of Abyssinia arrived unexpectedly in Ventnor by the 5.11 train yesterday (Thursday) afternoon, attended by only one man-servant.  He was received at the station by Mr J E Redfern, proprietor of the Beach Hotel, where the Emperor is staying.  Only a few fellow passengers witnessed his departure from the station in one of Mr Nash’s cars. It is understood that the Emperor intends to make a short stay in Ventnor for the benefit of his health, which has been adversely affected by recent anxiety.  All residents will hope that Ventnor’s health giving air will prove of benefit to the most distinguished visitor Ventnor has received for many years and we would particularly appeal to everyone to observe the courtesy usually extended by Ventnor to visitors so that His Majesty may be free from any annoyance.

“On Friday morning a number of people called at the Hotel to leave flowers for the Emperor, acting upon the suggestion of a local lady that the presentation of Ventnor, St Lawrence and Bonchurch flowers would be one of the pleasantest ways that local people to show their appreciation of his honouring us with a visit. To the surprise of some of them the Emperor graciously received most of the callers and personally thanked them for their gifts. During the day the Emperor walked on the Pier and Esplanade, also sitting in a deckchair on the beach for some time and enjoying the bright sunshine.  In the evening he attended the cinema at Shanklin accompanied by Mr and Mrs T F H Pethick.  Mr Pethick’s aunt, Mrs Pethick-Lawrence, is well known to the Emperor.

“On Saturday morning the Emperor gave an audience to the Editor of the Mercury accompanied by Mrs T F H Pethick to act as interpreter, as the Emperor does not speak English readily and prefers to speak in French. His great natural dignity is tempered by lack of formality during his holiday in Ventnor, and his sense of humour was obvious when the Editor of the Mercury expressed his apologies for the fact that, while he can understand French, twenty years of disuse had made him unable to speak it now.  The Emperor said that that was like many Englishmen, and when the Editor agreed that he was afraid that Englishmen were generally poor linguists, the Emperor retorted with a charming smile that Englishmen did not learn other languages because they were so proud of their own.  “We are not always so proud of our politicians” replied the Editor and the Emperor smiled. After a trip on Messrs Spencers’ motorboat, the Emperor took tea with Mr and Mrs H de Vere Stackpool at Cliff Dene, Bonchurch.  Mr and Mrs Alfred Noyes were invited to meet his Majesty.  The beauty of Cliff Dene gardens greatly appealed to him.”

Haile Selassie stayed in Ventnor for another five days.  It was indeed a very quiet holiday, spent walking on the Esplanade, enjoying the sun at the Pierhead, taking tea with friends and visiting the cinema in Shanklin – perhaps he saw ‘Bringing up Baby’, starring Katharine Hepburn and Cary Grant, which was released in early 1938. Before leaving Ventnor on 3 May, he asked the Editor of the Mercury to print a message to the people of Ventnor:

‘The Emperor of Ethiopia has had a very nice time indeed and his health is very much better.  He has received considerable benefits from his stay.  He has been very comfortable at the Beach Hotel. He deeply appreciates the kindness of the welcome given to him in Ventnor and all the kindness he has received.’

The Mercury’s final report of the visit noted that “Mr H L Twigge, who has placed his car at the Emperor’s disposal during his stay, drove him to the station from Bonchurch.   Mr Redfern was at the station to bid his imperial guest farewell. He left Ventnor by the 5.42 train.” 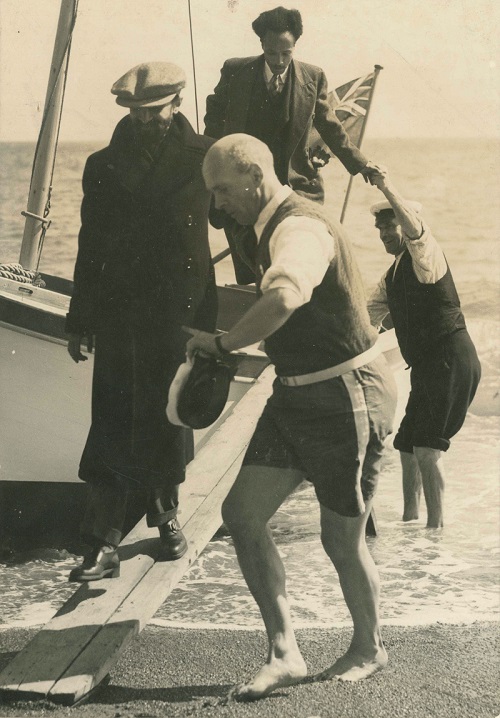 Chronicles: The Emperor Had a Very Nice Visit

Last update on May 26, 2020
Published February 14, 2018
Author: Lesley Telford
Categories:
Tags: There are no tags for this post