Permanent Displays in the Museum:

Permanent displays in the Museum include Ventnor’s development as a Victorian resort, the story of some of the shipwrecks off our coast including the loss of HMS Eurydice in 1878, an exhibition on Steephill Castle, and working models of Ventnor’s two railways  – Ventnor Station (closed in 1966) and Ventnor West (closed in 1952). 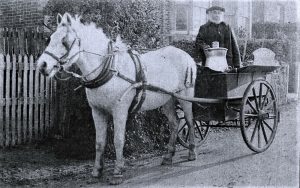 New displays for 2022 are as follows:

Lowtherville – the story of the growth of the suburb of Upper Ventnor, told in the faces of its people and buildings. Topography helped to make it into a quite separate community from the town itself, a theme already explored in the late Fay Brown’s hugely popular set of booklets on ‘Up Shute’, all still available to buy at the counter, price £1.50 each. A new booklet on Lowtherville, with improved illustrations, is under preparation by Colin Beavis. Photograph shows Arthur Dove in Newport Road.

Wroxall in times past – the farming village of Wroxall, a couple of miles or so north of Ventnor, grew significantly over the later nineteenth century, acquiring a surprisingly wide range of retail and other trades. A railway station was opened on the Ryde-Shanklin-Ventnor line in 1866 and the cottages constructed for the navvies building the long tunnel under the Downs subsequently became homes to villagers. The exhibition reproduces a fascinating range of images from the Heritage Centre’s large collection.

Aside from the permanent displays, other current exhibitions include:

Before they were famous – the story of the performers who tried out their acts at Ventnor’s Winter Gardens before becoming stars of popular music and of light entertainment. Comedian Dick Emery stole the show in the 1950 summer season, while in the summer of 1965, it was the rock band ‘The Who’, along with the strangely-named ‘Davy Jones and the Lower Third’. The Who went on to become a legend of the rock music scene, while Davy Jones turned into David Bowie.
Russian dissidents in Ventnor in the mid-19th Century – the exhibition tells the story of the radical emigrés from Russia and Eastern Europe who found in Ventnor a favoured summer retreat where they could plan political and social reform at home. The exhibition draws on Stephan Roman’s book, Isle and Empires, copies of which may be available at the counter.
Ventnor Mill – There was a mill on the cliff above the present Cascade for hundreds of years. It featured in many paintings, a symbol of rustic charm but also of the dramatic cliff scenery of the area. There is a fine model of the mill adjacent to the display. The mill story is covered in part of the booklet on Alexandra Gardens, available at the counter.
‘Once upon a time there were trains’ – Ventnor once had two railway stations. And for something like 100 years, trains were the primary means by which visitors arrived in the town. The main line came in via a long tunnel under St. Boniface Down. It linked the resort with Ryde and the towns along the east side of the Island. The second line came from Newport and Merstone, terminating at a station behind Steephill Castle. You can read a fully illustrated account of the Ventnor West branch line in Peter Harding’s book, available at the counter priced £4.00
‘Mayfair-by-the-Sea’ – Over the Victorian age, parts of Ventnor took on shades of London’s West End, perhaps best exemplified by the Royal Marine Hotel which became a haunt of the rich and the famous. It boasted a hydraulic elevator and a palm court. You can read all about Ventnor in this period in Michael Freeman’s book: Victorians in search of winter health, available at the counter, priced £9.95.
Clarendon Boarding House – Looking southwest from the top of Grove Road in Ventnor, the Clarendon was the area’s premier boarding house. It had a strikingly cosmopolitan clientèle, including visitors from all over Europe, from America and from Australasia.
Victorian Shopping Paradise – Ventnor’s principal streets in the nineteenth century offered the best shopping on the Island. They vied with London’s West End for the quality of goods offered to customers, a reflection of the relative wealth of its visitor population.
A History of Ventnor Breweries – This is the story of brewing in Ventnor, beginning in 1840, at the very start of the resort’s growth. There is a booklet to accompany the display, available at the counter, price £3.00
The story of Olivia Parkes, commonly also known as ‘Britannia’ – She lived for many years in a wooden hut on stilts on the foreshore at Myrtle Bay, just west of Ventnor. It had no running water and no sanitation. She became an endless source of fascination for visitors until forcibly re-housed in 1958.
Ventnor People – In its Victorian heyday, Ventnor and the surrounding villages had many famous residents and visitors, often from the worlds of literature, art and music. These included Myles Birket Foster, Elizabeth Sewell, Charles Dickens, Pearl Craigie, E.W. Cooke, Thomas Miles Richardson, J.M.W. Turner, Karl Marx and Ivan Turgenev.
‘It used to be like this’ – the memoir of George Haynes – This remarkable man, born at Castlehaven, Niton Undercliff, in 1906, has left us an extraordinary account of another life-world. Here you will find little in the way of consumerism, just a tale of everyday living, combining hard work and drudgery on the one hand and the joy of simple pastimes and pleasures on the other. There is a new publication to accompany the exhibition, available from the counter, priced £8.50.
A Godshill Life – Memories of a young girl growing up in the village just before and during the First World War and of her life in service from the age of 13. It offers a poignant reminder of how hard life was for many families in those days. But it also tells of simple pleasures in what was a heavily bounded life-world.