Win Salter was born in 1935 at Moorhills Farm in Whitwell where her father, Fred Salter,  had followed his father Charles as the farmer.

The photo of her father Fred on his hunter, dressed as a hussar, is from the early 1920s and taken in Whitwell; he was on his way to be a Marshall at the Ventnor Carnival.

When Win was three, the family moved from Moorhills to Stenbury Lodge in Whitwell, where they were living throughout the second world war.  Although she was only a child at that time, Win recalls that when Southampton was bombed you could see it alight from Stenbury.  There were soldiers billeted on the downs, and she remembers them coming to the house sometimes for meals.  Her father caught rabbits, and mother would make a huge rabbit stew, followed by apple pie, and the soldiers  would park their rifles in a big pile in the porch and come in for the feast; they brought sugar for her mother, and bits of chocolate for the children – and nylons for Win’s elder sister.  When D Day finally came  the sky was black with planes, droning across all day long.

The family moved again, this time to Sussex Villas in Tulse Hill, and Win spent her teenage years in Ventnor.

One of the things she enjoyed most was the Ventnor Roller Skating Club which used the rink on the Eastern Esplanade.

“We were just teenagers. We played, hockey and netball, mixed  boys and girls.  Then there was speed racing, where we did circuits round and round the rink, and we used to practice fancy dance manoeuvres – two-step and twirls. The boots were so expensive, we had to save up and put our Christmas money towards the cost.  Once you’d bought them you took them to the man who attached the skates.  Those boots were so stiff at first until they were worn in – you’d go home with blisters all over your feet, but you daren’t tell your mum!

“On gala nights we skated into the evening, and there were huge crowds around the rink.  They would throw money onto the rink, and the youngsters would scramble to pick it up – it all went into club funds. It was magic to skate at night, with the lights from the pier, and the sea, and the moon shining on the water. Afterwards we would go to the ‘Continental Cafe’ (on the esplanade, close to where Ale and Oyster is now) who used to serve us all coffee and doughnuts.”

When she was fifteen she was a member of the Ventnor Ladies Roller Skating Club Netball Team that travelled to Southsea for a match in May 1950.

“We wore pale blue skirts made by Janet’s mum, and we embroidered the club name on our tops ourselves. It was the first time we’d played away, and we were very nervous, overwhelmed really by the experience –  we lost five nil, but it was good. The team was me, Janet Deighton (who was captain),  Jean Randall, Doreen Amy, and Valerie Beavis.

Win also recalled taking part in Ventnor Carnival and the Carnival fancy dress ball at the Winter Gardens.  There were so many more floats then, and stalls in Marlborough Road at the bottom of Tulse Hill where you could buy masks, balloons, and Carnival costumes. Her uncle Evelyn was in the navy, and Win would dress up in his white ‘tropics’ uniform, and complete it with a false beard. There were also floats for the ‘Holiday Makers’, perhaps organised by their hotels or boarding houses.

There was always a band on a Saturday night at the Winter Gardens, often one of the big bands of the time, and people would come from all over the Island.  Win would walk down with her friends, in their long dresses and dancing shoes, every Saturday.  It was very proper – her father would be waiting outside the doors at a quarter to eleven to pick her up and take her home, and they would be back in Tulse Hill by 11 o’clock.

In September 1954 Win married Paul Arnold at St Catherine’s Church.  The wedding breakfast was held at the Winter Gardens (Win and Paul had met at a dance there one evening when he was in Ventnor visiting  his sister, Juliet , a TB patient in the RNH).  The wedding photos were all taken by Robbie, a beach photographer who Win was friendly with. One of the photos shows Win coming down the Winter Gardens staircase in her wedding dress and veil. Clothes rationing was not long ended, and Win had bought the veil herself, which caused a row with Paul because they were saving up everything they could for their new home. But the wedding dress was homemade by Paul’s mother who also drew and embroidered the flower decorations and sewed on the seed pears.  Win remembers buying the material from a stall in Tooting market in London, and Paul’s mother rolling the bale of oyster coloured satin out across the floor, pinning on the paper pattern and then holding her shears to the cloth with the words ‘Ready Win?’

[These notes were made by Lesley Telford during a conversation with Win Smith when she brought in her photographs, some of which are shown here, including  ‘Gala Nights’ and netball and hockey at the Ventnor Roller Skating Club in the early 1950s, and scenes of Ventnor Carnival.] 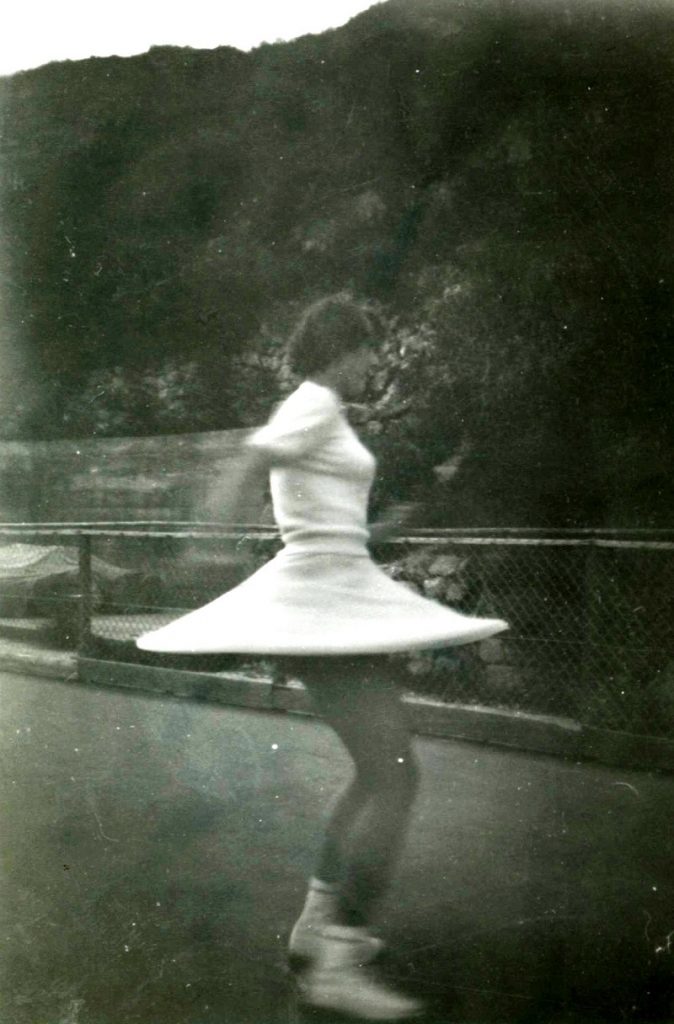 Your Stories: Ventnor Roller Skating Club and dances at the Winter Gardens

Last update on January 28, 2020
Published October 1, 2017
Author: Lesley Telford
Categories:
Tags: There are no tags for this post